The 5Ds of Perimeter Security

Devising an integrated perimeter security strategy is a crucial part of ensuring your site is safe from all sorts of attack at all times – but where to start?

The 5 Ds of perimeter security (Deter, Detect, Deny, Delay, Defend) work on the ‘onion skin’ principle, whereby multiple layers of security work together to prevent access to your site’s assets, giving you the time and intelligence you need to respond effectively.

On the outermost perimeter, it’s key to have in place some forms of visual deterrence, such as fencing, lighting, and signs. This can be an effective way of dissuading potential intruders before they even attempt to breach your site.

Being able to detect trespassers is vital. This can take the form of motion detectors, CCTV, and other electronic surveillance methods which can sense – and record – any intrusion on your site.

This is all about denying entry to your site, or even its most sensitive areas, with access control solutions. From manned security gates to card swipe systems, you can manage who goes where on your premises.

A range of security solutions can be utilised around your perimeter to delay an attack, such as parking controls, road blockers, and interior barriers – all of which can slow down an intruder and offer valuable time to deal with the security breach.

This is the final and innermost ring of security, which usually involves your security team or the police apprehending the intruder.

See how our security solutions can help you deter, detect, deny, and delay criminals – and ultimately defend your site. 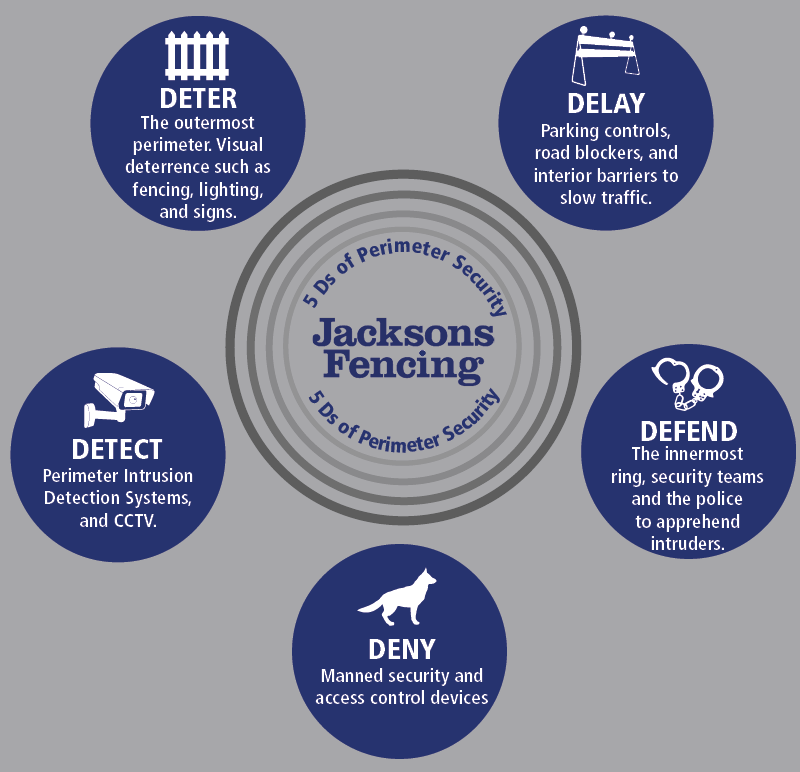