Significant infrastructure works were carried out in 2017 at Portsmouth Naval Base in order to modernise facilities and prepare for the arrival of the Royal Navy’s two new 65,000 tonne Queen Elizabeth Class aircraft carriers.

BAE Systems identified Jacksons Fencing to provide high-security and access solutions at a number of locations on the naval base, including end-to-end specification and installation of onsite fencing, without the need for third party involvement. The project called for Jacksons Fencing’s expertise as the site houses extremely valuable defence assets and is a lively operating base for 120,000 visitors annually and 15,000 daily workers. 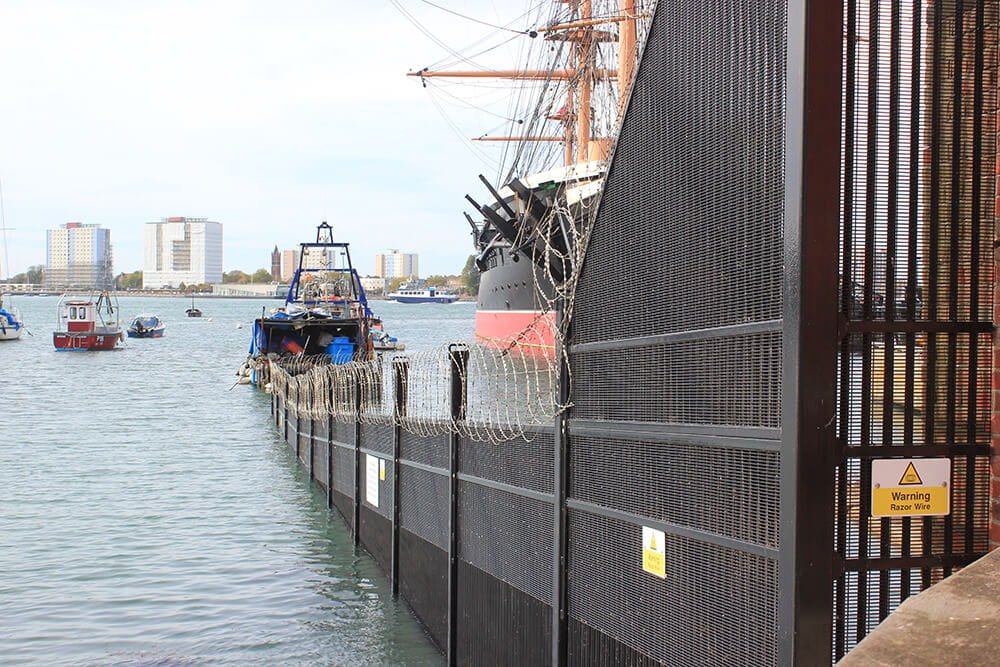 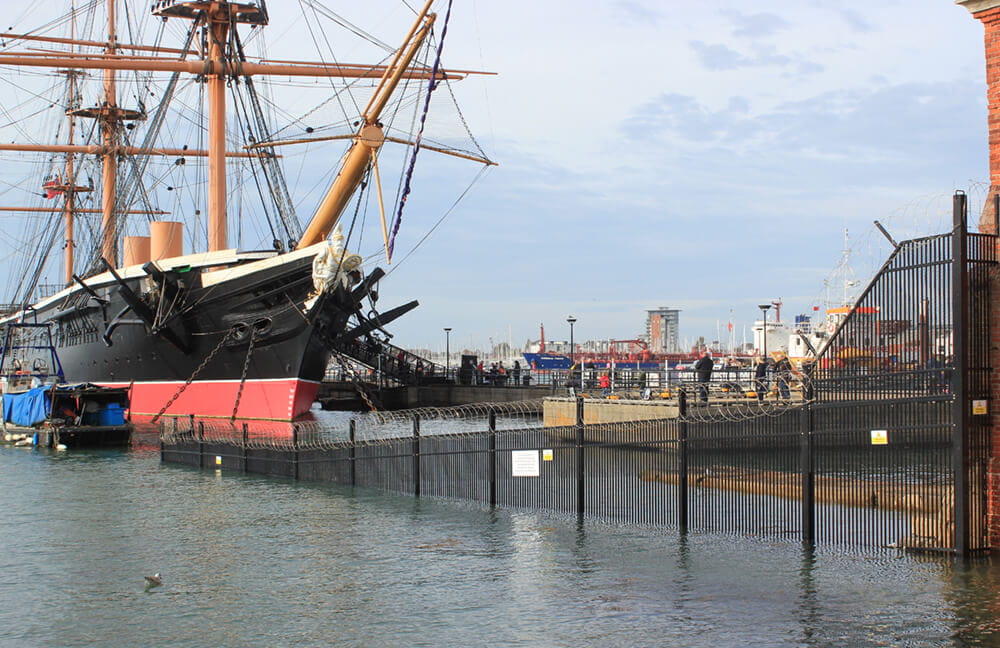 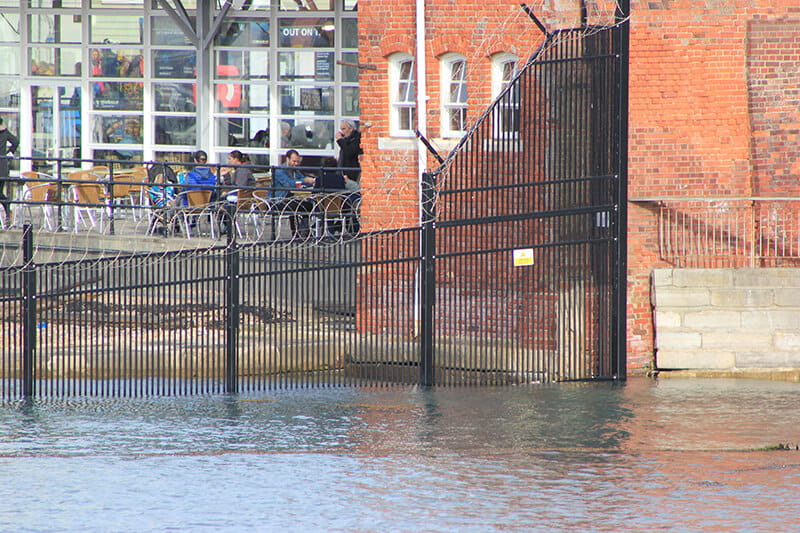 Princess Royal Jetty needed to be secured from the rest of the naval base. Jacksons Fencing installed 440 metres of its Trident® Securi-Mesh® System as well as one large sliding gate, five manual double leaf swing gates and six turnstiles. To maintain the integrity of its protection capabilities, the fencing system is overlapped by a minimum of 75mm at the posts. It has clamp bar fixings to provide additional resistance to penetration attempts, and anti-climb design to prevent potential intruders from bypassing the perimeter from above. It also has clamp bar fixings and anti-climb design. Jacksons completed the works in time for the new aircraft carrier to set sail from its new home dock in late October 2017.

At Trafalgar Gate, the main entrance and pass office to the naval base, the existing fencing needed to be replaced. Jacksons Fencing installed 220 metres of the Trident® Securi-Mesh® System fencing as well as turnstiles as part of this refurbishment.

HMS Warrior 1860 at Portsmouth Historic Dockyard is open to members of the public and tourists, who are welcomed aboard the Warrior for an interactive, historical and educational experience. The publically accessible site has a separate entrance at the Victory Gate and shares a beach border with the off-limits Naval Base. Consequently, high-quality fencing was required to ensure that the barrier between the general public areas and the Naval Base was not penetrable. Jacksons Fencing’s Trident® Xtreme 3XM was installed on the beach and ran out into the sea. It was double galvanised and marine powder coated black to ensure it was protected from the elements. The Trident® Xtreme 3XM system was chosen because it provides an immensely strong and rigid structure. It has vertical bars featuring a fully welded tubular stopped pale-through-rail construction with horizontal railed sleeved on to the upright posts with concealed fixings. Pale-through-rail design adds strength to the fencing and ensures that no bolts or palings can be removed or prised apart. The combination of its closely spaced pales, substantial wall thickness and novel cut-delay technology, is designed to frustrate and deter attempts to penetrate the fence. It provides good visibility which aids surveillance tools and incorporates anti-climb design.

An iconic and out-of-service harrier jump jet which played a valuable role for the Royal Navy for more than 30 years, is also housed within the Portsmouth Naval Base and is not accessible by the public. In order to protect this asset, Jacksons installed a pedestrian guardrail around the jet helping to showcase the display without intruding on its appearance. The welded hollow tubular rail and solid pale construction is extremely strong and features a bolt-together design for ease of installation or replacement.

Cris Francis, Security Consultant at Jacksons Fencing, commented: “Jacksons successfully balanced the need for both access and exclusion in perimeter security for all of these projects at Portsmouth Naval Base.. Due to the age and nature of the site, there were many challenges in the design and installation which we had to overcome. The specification and installation was completed entirely by Jacksons, meaning a more efficient fully rounded service was successfully delivered.”

Jacksons Fencing has been in the business of perimeter protection for over 70 years, providing a full mix of solutions complete from design support to installation and maintenance. Protecting and securing sensitive sites around the UK, its project teams have a vast wealth of experience supported by a range of products that can meet the highest security requirements.

From the quality of raw materials used, through the galvanising process to BS EN 1461, to powder coating to BS EN 13438, every Jacksons product is designed to deliver best in class performance and lowest lifetime cost; culminating in the best value on the market.