Mote Park is a 450-acre green space within the town of Maidstone, Kent. The expansive park has woodland, grasslands and rivers all surrounding a 30 acre lake.  The park attracts over one million visitors a year and provides source for a range of activities such as water sports, family fun days, dog walking and wildlife spotting.

Over the next three years, Maidstone Borough Council has committed to investing £4.3 million in the redevelopment and improvement of Mote Park, with the scheme being managed and overseen by Kier construction.

As part of the regeneration, £300k is being invested on redesigning and rebuilding the popular children’s playground and play area. Plans for the new playground have been PiPA (Plan Inclusive Play Areas) approved, making it the only facility in Kent to offer this standard. Engaging the senses is proven to help children develop academically and in their well-being and the design of the playground, led by Allen Scott Landscape Architecture and Eibe Play Ltd, will include activities which engage at least three of the children’s senses from a standing and seated position. 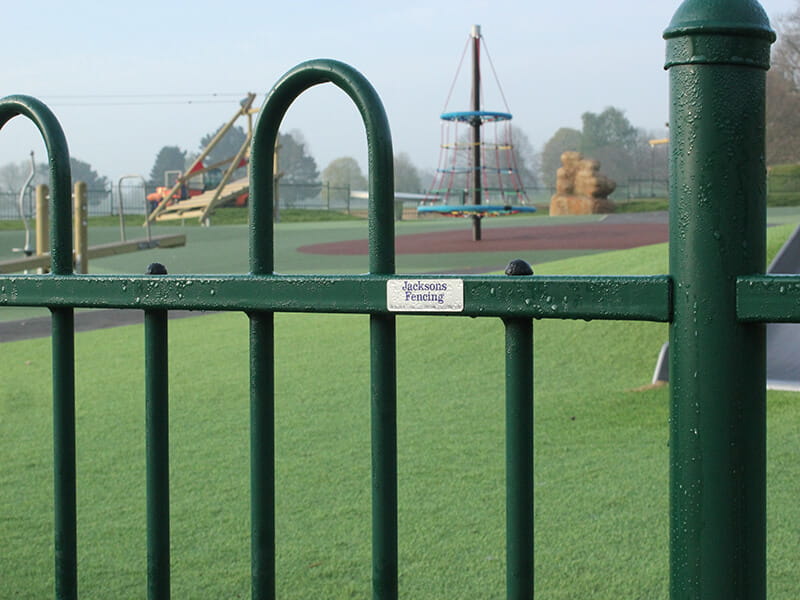 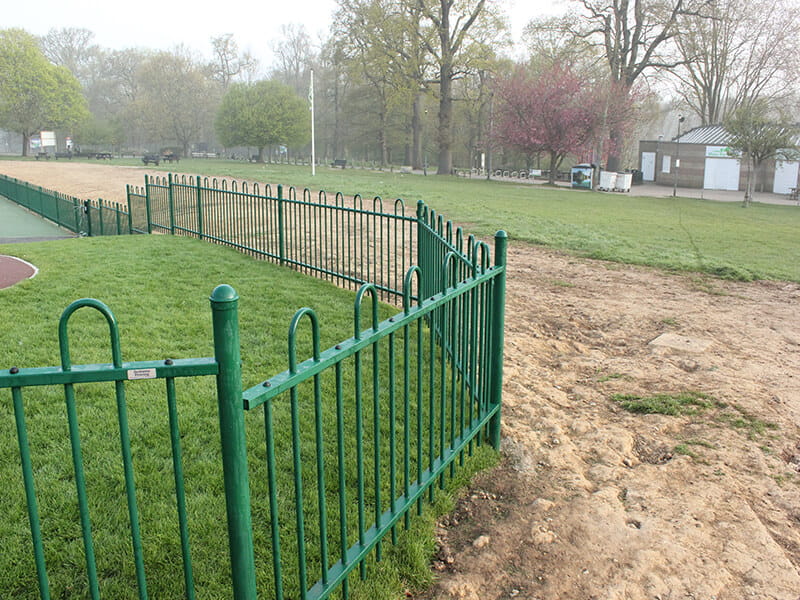 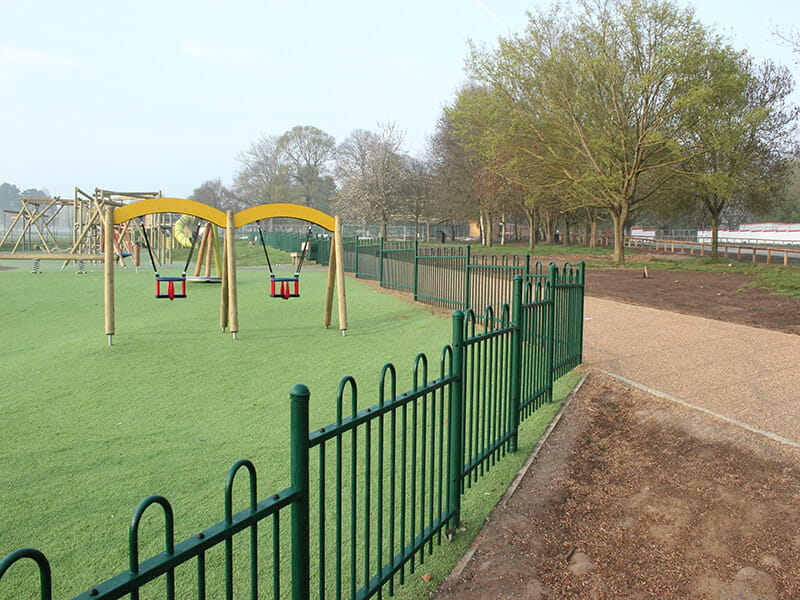 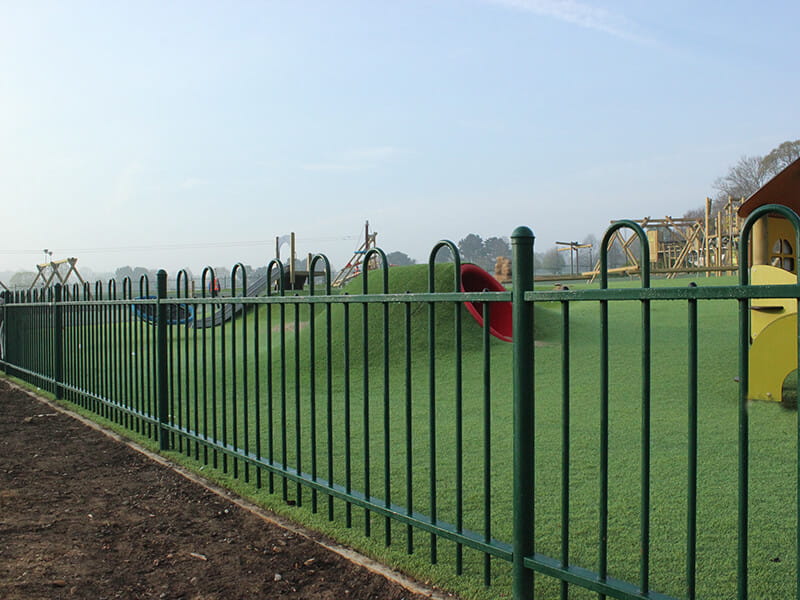 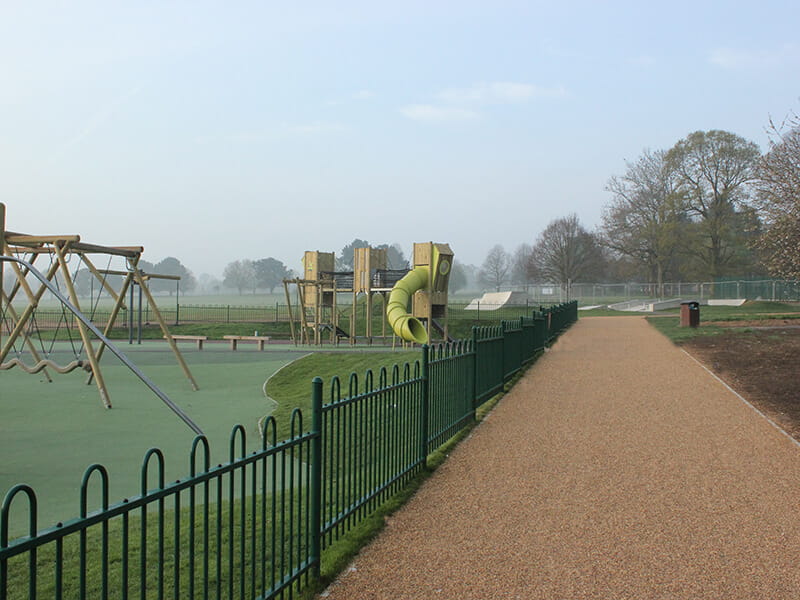 To safely secure the perimeter of the new play area we supplied 230 metres of Anti Trap Bow Top fencing and a number of matching gates. Due to the nature of the site, other park users and the large volumes of families with young children expected to visit the play park, safety was a top priority throughout the project.

Anti Trap Bow Top fencing is a RoSPA approved play area fence, manufactured to fully conform to BS EN 1176. The fence is designed to specifically eliminate the risk of children getting their heads or limbs stuck between the pales or hoops on top of the panels. The new playground fencing was supplied in 1.2m high panels, providing a strong perimeter to keep children safely enclosed within the play area perimeter while playing, and reducing the risk of children scaling the fence to get out and being placed in immediate danger due to close hazards such as the deep lake.

Multiple matching single leaf gates were specified and installed to allow for safe access in and out of the play park, reducing congestion at these positions.  More than one gate not only reduces congestion at busy times but also reduces risks (one individual cannot easily block access to four gates, allowing for children to escape if need be).

All gates were supplied self-closing with magnetic latches, allowing the gates to automatically shut at timed intervals using a magnetic system. Using a controlled system of entry and exit reduces the risk of injury and the ability for children to leave the play park without parental guidance, at the same time reducing the chance of dogs from entering the play area. One matching double leaf gate was also installed for service use, primarily to allow for the maintenance of the play area but also for the essential access of emergency service vehicles.

The fence panels and matching gates were all supplied with a polyester powder coating finish in green RAL 3005, which blends in with the natural surroundings of the park.

To accommodate sloping ground our Anti Trap Bow Top panels were stepped to keep a continual height along the perimeter. Shorter 1 metre bays were supplied to form the corner panels to accommodate the shape of the play area along with the sloping terrain the play area was built on.

The development was completed in the middle of April 2019 and has seen thousands of visitors already enjoying the new play area. 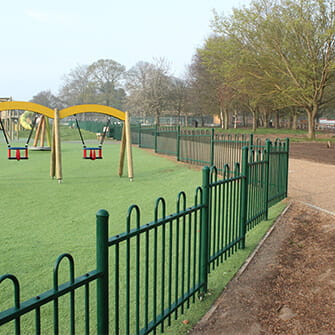 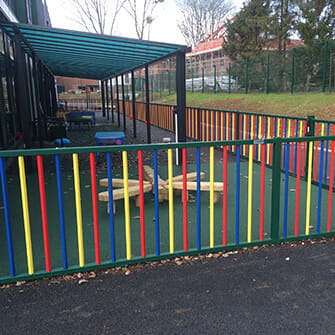 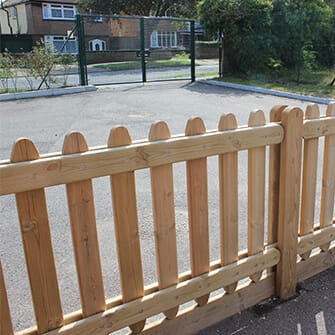 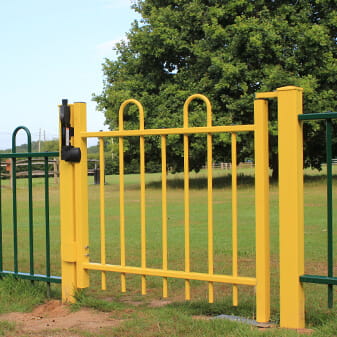 View our other Education Case Studies