Improving Perimeter Safety and Security at the Eurotunnel Terminal in Calais

Taking more than five years to complete at a cost of £9.5 billion, the Channel Tunnel is the longest undersea tunnel in the world and links the UK mainland with France via its 50.2km route between Cheriton (Folkestone) and Coquelles (Pas-de-Calais).

Groupe Eurotunnel SE manages and operates the Channel Tunnel and since commercial services began in 1994, more than 345 million passengers have travelled through the tunnel – that’s equivalent to five times the population of the United Kingdom.

With up to 400 trains passing through the tunnel each day, the Eurotunnel service has created employment and prosperity on both sides of the Channel, most especially in the intermodal distribution, hospitality and retail sectors.

However, it is the global migration crisis and specifically events over the past 12 months which has focussed media and public attention on Eurotunnel and in particular the incidents taking place at the Coquelles terminal near Calais; where large numbers of displaced migrants congregate to attempt to cross the channel into the UK by illegal and potentially dangerous means.

There are an estimated 5,000 displaced men, women and children who currently find themselves existing in a state of uncertainty, living in makeshift camps and sleeping rough in and around Calais. They are determined to gain entry into the UK at virtually any cost and their attempts inevitably lead to conflict and confrontation with those responsible for keeping them safe until they can be ‘processed’ through an immigration system operating at breaking point. 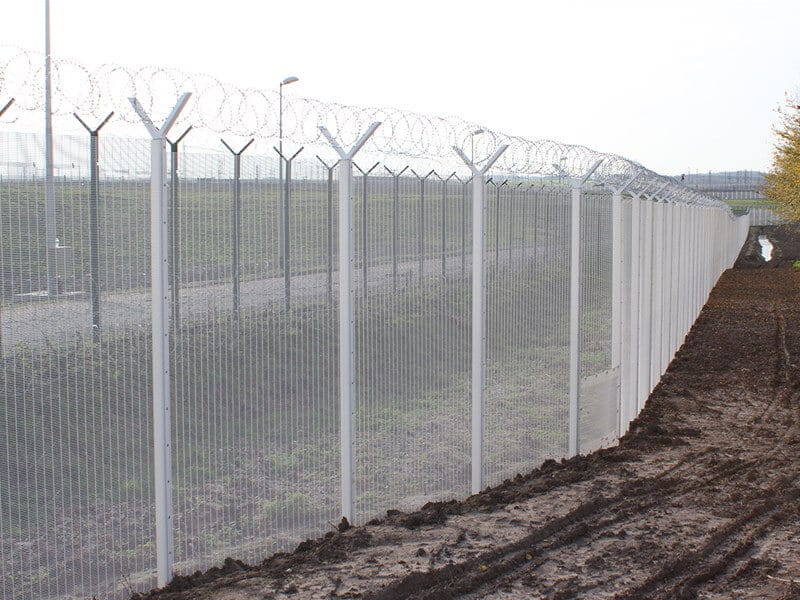 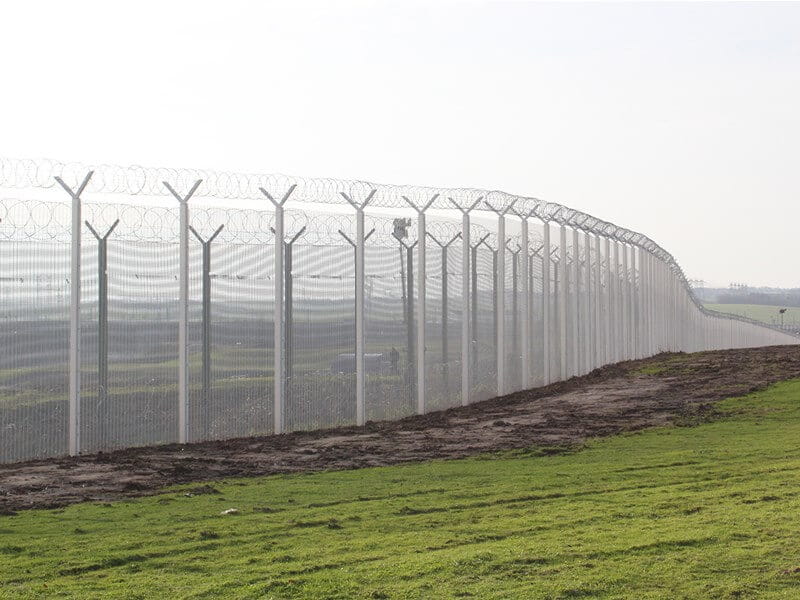 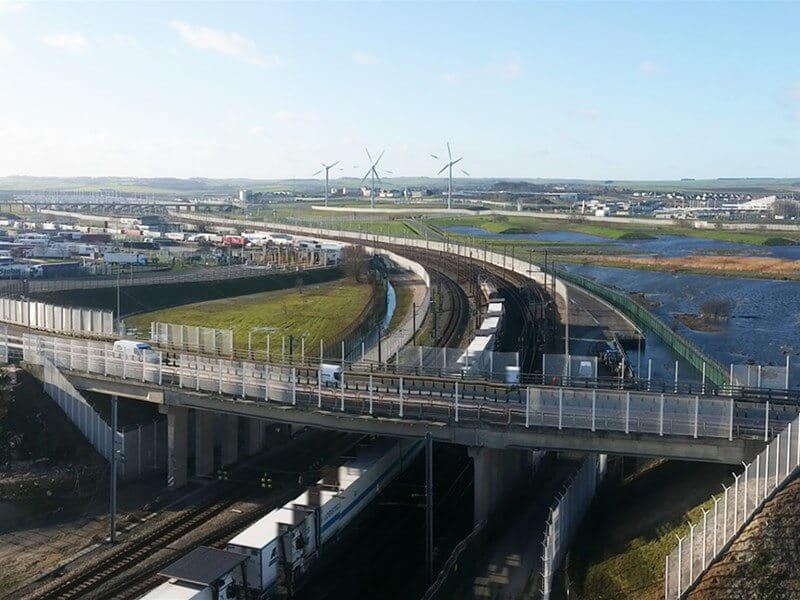 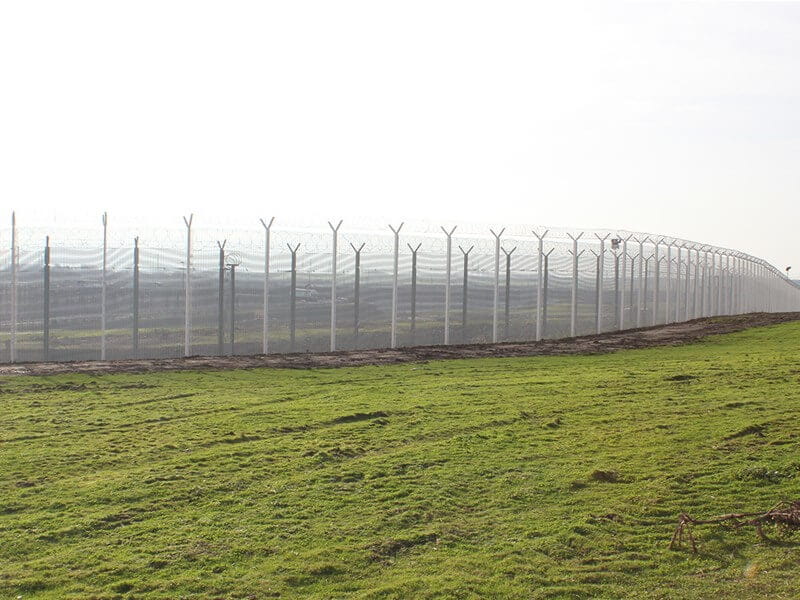 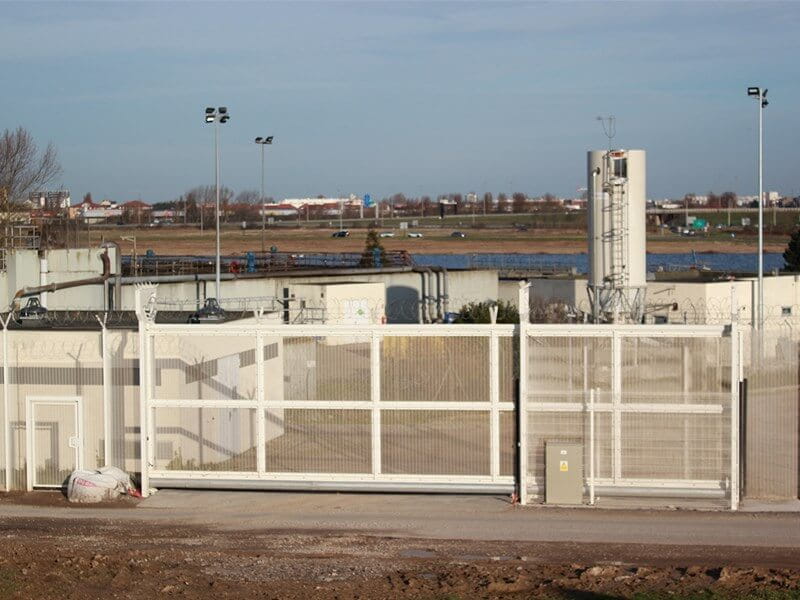 The Guardian newspaper reported that on one particular night in July 2015, there were some 2000 attempts to breach the perimeter defences at the Eurotunnel terminal, in spite of the £9.2m spent by the company on reinforcing security, including fencing, infra-red CCTV and more guards in the first six months of 2015 alone.

On 28th July 2015, Home Secretary Theresa May announced that the UK Government would provide an extra £7 million to improve security around the French terminal, primarily for better fencing but also to increase the number of security staff.

The need for speed. And accuracy.

On 12th August 2015 , Jacksons were contacted by Border Force, the law enforcement command within the Home Office responsible for securing the UK border, with a brief to tender for the design, manufacture and installation of security fencing and a series of matching gates.

Jacksons were on site the following day for a detailed briefing and to survey the project, following which the company responded quickly and had returned its tender submission for review by the principal stakeholders (Eurotunnel as the client and Border Force on behalf of the UK Government), complete with wind loading and foundation calculations, within 1 week from the date of the initial visit.

The clock was ticking and the week following submission of the tenders, two contractors were appointed to the project for 5km of fencing and associated gates to be completed by the end of October. Around 80% of the new fencing would be deployed to reinforce existing physical security measures with additional layers, while the remaining 20% was destined to replace existing fencing.

Initially Jacksons were awarded 3.3km of the 5.0km contract, however as of October 2016, the company  worked across 4 key locations spread throughout the perimeter and interior of the site and installed a total of 11,523m of fencing and 63 gates.

A security fence that’s all about safety?

Not surprisingly, given the sensitivity of the issues around the project, the headlines in media have unfairly dubbed the new security fences at Eurotunnel as ‘anti-migration fences’. That of course fails to recognise the daily reality being faced by the Eurotunnel team, tasked with maintaining an efficient service, 24 hours a day at a critical European transport hub while forces beyond their control conspire to make that difficult, if not impossible at times.

The truth is that the new fencing and gates at the Eurotunnel terminal with its 41.8km perimeter (that’s almost exactly double the length of the perimeter at Heathrow Airport) serves one purpose only – and that is to keep people safe and out of harm’s reach– whether it’s those attempting illegal breaches into the Eurotunnel site or those responsible for preventing them from doing so. 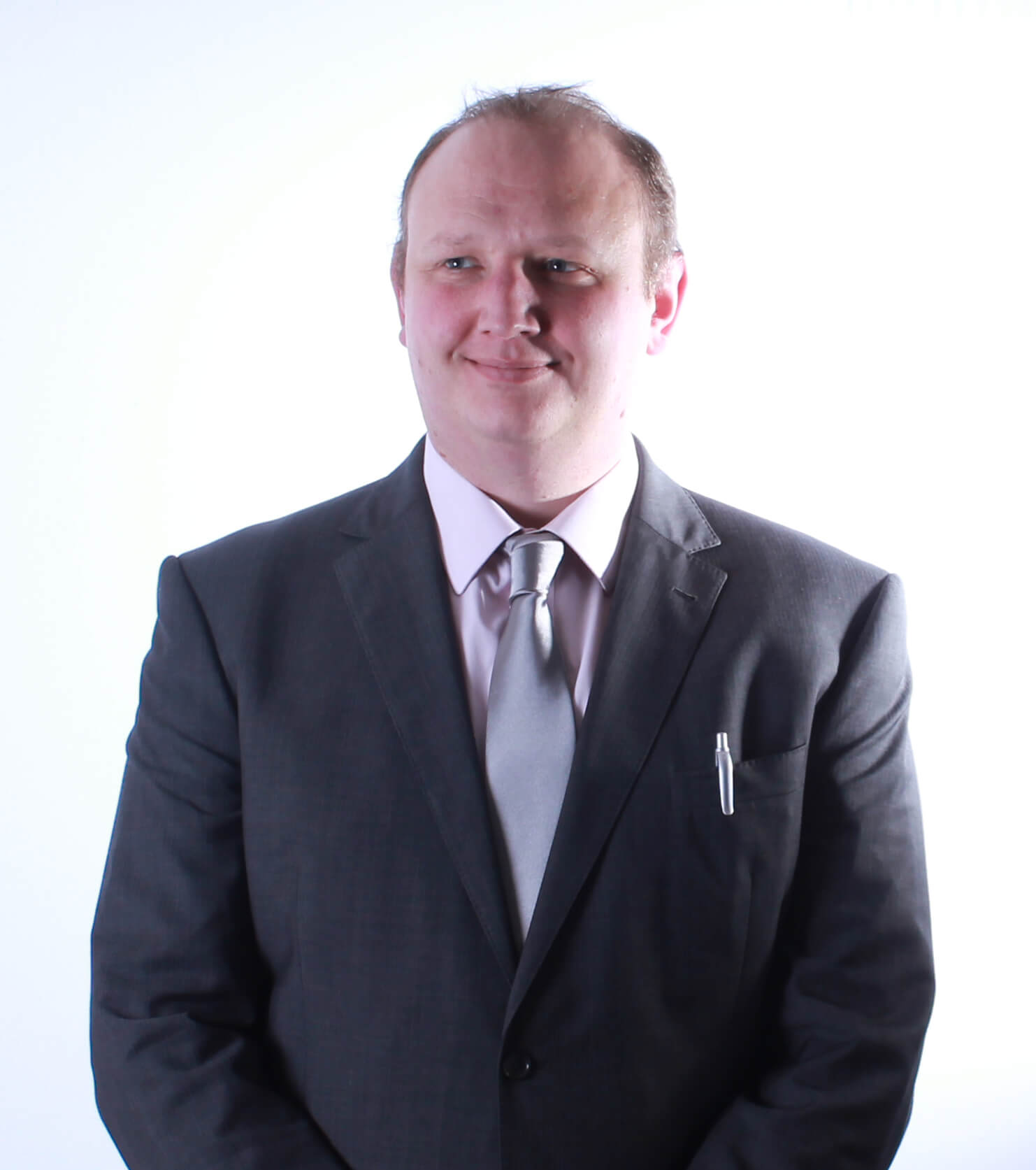 'I don’t believe that any of us involved in the higher end of the perimeter security industry subscribe to the idea of creating an ‘anti-immigration fence’…but rather to providing a ‘protect and defend barrier’ which serves to keep everyone safe. Respective governments have yet to arrive at a solution to the systemic causes for the global migration crisis. The new perimeter fencing at Eurotunnel, will be just one of many individual actions which collectively make a small but worthwhile contribution to help in what is a very real and ongoing humanitarian crisis.'

It’s an old adage that safety and security are two sides of the same coin and it’s been proven that without a reliable and robust safety regime in place, the Eurotunnel service cannot operate and security breaches to the perimeter not only disrupt the service, but expose migrants and security staff to unacceptably high levels of risk.

The biggest challenge wasn’t making and installing the fences and gates but the logistics of keeping a site team of 70 working flat-out, supplied with materials 8 hours a day throughout the contract period.

With its headquarters in Kent, just 12.4km from the UK entrance to Eurotunnel in Cheriton and a reputation for delivering innovative, certified and approved security fencing systems, meeting the specification for the ‘358’ welded mesh fencing system specified for the project wasn’t ever going to prove to be a stumbling block to Jacksons Fencing in delivering the project on time.

However, the need to keep the 70 strong Jacksons site team - who had decamped to Coquelles for the contract period - supplied with posts, concrete, fixings, mesh panels and razor wire while they worked at pace in up to four locations was the ever moving supply chain requirement that Stephen Hancock, Jacksons’ Contracts Manager, found the greatest challenge.

As Stephen recalls: 'When you have transplanted a large, dynamic team of people along with a fleet of plant, associated equipment and supplies to France and established a secure compound with health and safety and welfare facilities, you have to make sure that those resources are optimised at all times.

We took a leaf out of Eurotunnel’s book and ran a shuttle service from our HQ close to Ashford to our secure compound on site in Coquelles via Eurotunnel…and from that compound, using the two-way radio link between the fencing teams, loaders and drivers, we coordinated our fleet of tractors and trailers, excavators, dumpers, cherry-pickers and tele-handlers which supplied and supported the teams with equipment and materials throughout every working day'.

The other no less important consideration in delivering the project efficiently was to ensure that the team included native French contingent as the majority of the principal client contacts on site were French and so too were the security personnel, local suppliers of concrete, site welfare facilities and of course the local hotel and restaurants.

Frederic Aubert, General Manager, Jacksons Clotures, the company’s French division and his team provided the essential agile lines of bi-lingual communication which helped to ensure all parties were kept informed with accurate information on project status and requirements in a timely manner.

A safe and secure perimeter with added strategic target hardening

The fencing and gates specified for the project were based on the proven ‘358’ wire mesh panel system, a versatile design with welds at each intersection for strength and small apertures to eliminate foot and finger holds and prevent objects being passed through its fabric. It also provides resistance to cutting by conventional hand tools and is employed extensively in higher security applications where it is supported with detection and surveillance technologies.

They measure 3.8m high above ground and are topped by 450mm high ‘Y’ shaped extensions which carry six rows of barbed wire and coiled concertina razor wire resulting in an overall fence height of 4.25m which is maintained over the undulating contours of the Eurotunnel site.

Jacksons also manufactured and installed 35 single-leaf and 14 double-leaf manual swing gates in and around the site for controlled pedestrian and vehicle access along with one 8m automated cantilever sliding gate which was designed and installed fully compliant with EU Machinery Directive 2006/46/EU. 13 other specialist automated gates were also installed in various locations across the site.

The agility to flex around and meet changing needs

With 41.8km of perimeter to secure and strategic operational assets to protect against escalating threats, it was inevitable that the scope of the project evolved and soon after the Jacksons team arrived on site, they were asked to respond to an emergency request from Eurotunnel following the breach of security by 200 migrants on Saturday 3rd October. The team, who were based at a hotel just 1.6km from the site, were able to respond within an hour of receiving the request and quickly replace and repaired the damaged sections of fencing.

Disruption to the Eurotunnel service comes at a high cost on both sides of the Channel. It was important that all works were carried out around the operational requirements of the site and avoiding the possibility of incidents or accidents which could threaten Eurotunnel service availability. Hazards included underground power, telecoms, water and drainage systems, overhead power lines and all the other essential infrastructure associated with running a key transport terminal.

A thorough risk assessment process ahead of arrival on site and the constant monitoring of changing conditions as the teams undertook additional sections ensured there were no reported injuries or stoppages throughout the contract.

General Manager from Eurotunnel commented on completion of the project:

Thank you and your teams for your key contribution to the success of our security plan. We have fully appreciated the commitment and the efficency of your teams …The new fencing and other security upgrades have made a big difference to the security at our terminal and allowed our staff and security services to operate in greater safety in what are difficult times.”